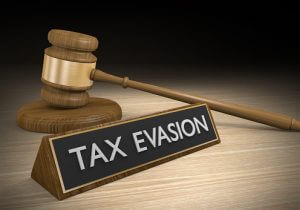 The IRS is a powerful department within the United States government, as it is their job to collect the funds needed to finance the programs and services of the nation. It comes as no surprise that the IRS will use all the tools at their disposal to collect taxes owed, including the courts. The tax evasion charge is infamous for its use in bringing down organized crime, but it is more often used to combat abusive tax schemes, abusive returners and other non-filers. As stated by IRS.gov, those who commit acts of tax evasion are considered to "pose a serious threat to tax administration and the American economy. Their actions undermine public confidence in the Service's ability to administer the tax laws fairly and effectively."

The IRS takes their role in administering tax law with the utmost seriousness. That's why it is important that taxpayers understand their rights and the law when handling tax-related matters.

What is Tax Evasion?

At its core, tax evasion is what the name suggests: the avoidance of paying taxes. What many may not know is there are multiple forms of tax evasion. Each instance is a felony, outlined by statute, and the punishment can include a fine, imprisonment or both. Fines are doubled for corporations.

Likely the most well-known form of tax evasion is the "attempt to evade or defeat tax." Related to this is the "willful failure to collect or pay over tax," which applies to any person or company in charge of collecting or paying taxes. Individuals who are found guilty of either avoiding paying or collecting taxes can face up to five years in prison and/or a maximum $250,000 fine. The same punishment faces those found guilty of "conspiracy to commit offense or to defraud the United States."

Similar to actively attempting to avoid paying or collecting tax is the "willful failure to file return, supply information, or pay tax." While evading or failing to collect taxes is considered a felony, willfully failing to file a return, provide information, or pay the tax will result in a misdemeanor in addition to any other applicable charges. If an individual is found guilty of doing so, they can face a maximum of a year in prison and/or a $100,000 fine.

While some people may try to avoid providing information altogether, others will try to be dishonest, but this can result in a conviction of "fraud and false statements" for either the person providing the information or anyone who assists or advises someone to do so. For both instances, being found guilty can result in a maximum of three years imprisonment and/or a $250,000 fine. While not related to providing false information, any person who attempts to interfere with the IRS, their process, or employees will face the same penalties.

The IRS and Arizona Department of Revenue are powerful entities that are keen on keeping the US and state governments funded. To protect your rights, you need strong legal representation from experienced attorneys. Our legal team includes both a former IRS attorney and an experienced criminal defense lawyer, so we are well-equipped to defend you against tax evasion and related charges. If you or someone you know is currently dealing with a tax controversy,  contact our office online or call 480-378-9000 today to schedule your free consultation.