Home » Blog » With the Deadline Approaching, Are You Ready to File Your Taxes?

With the Deadline Approaching, Are You Ready to File Your Taxes? 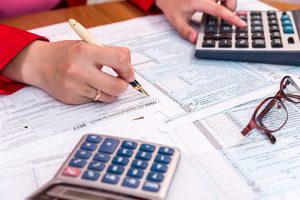 Every April, many Arizonans feel tax anxiety as the deadline draws near. In 2018, the apprehension may be even more pronounced in light of the recent changes to the tax law, known as the Tax Cuts and Jobs Act of 2017.

While the tax reform package signed by President Trump will have an impact on every taxpayer, keep in mind that most changes will not apply this year. According to a recent Arizona Republic report posted at azcentral.com, Americans filing their returns by the deadline, April 17, 2018, (or later if they file for an extension) can follow the rules that were in effect last year. Most of the rules applying to deductions and related tax issues will stay in effect for another year.

If you look at your paycheck stub, you will notice that your withholding amount has changed. It is likely lower than it was last year, reflecting the new tax rates which are generally lower.

Starting in 2018, there is a $10,000 cap for deductions on state and local income taxes, including property taxes. That applies per taxpayer household - not per property, according to azcentral.com. When you combine your taxes, you can easily top $10,000. Previously, there was no cap.

Azcentral.com reports that the $10,000 cap is not tied to inflation, which means that fewer people who itemize will be able to write off these deductions in full in the coming years.

While the tax-filing deadline is rapidly approaching, taxpayers who decide they're not quite ready can opt to file an application for an automatic six-month extension. Their returns will be due October 15, 2018.

If you need to talk with an IRS representative, you'll find it's harder to arrange a face-to-face meeting, according to azcentral.com. The IRS no longer allows people to walk in to their local IRS office and meet with a representative. You'll have to make an appointment online or call (844) 545-5640.

Over the past seven years, the IRS has reduced the number of offices it staffs by 7 percent. More people are interacting with representatives online, on the phone or by mail.

If you need help with tax planning and asset protection, we want to hear from you. Don't hesitate to contact Brown, Naegle, Crider & Jensen LLC for experienced counsel.

We understand how your taxes can become complicated, especially if you're facing difficult circumstances such as a divorce or tax controversy such as an audit, lien or levy. Contact us today to find out how we can assist.